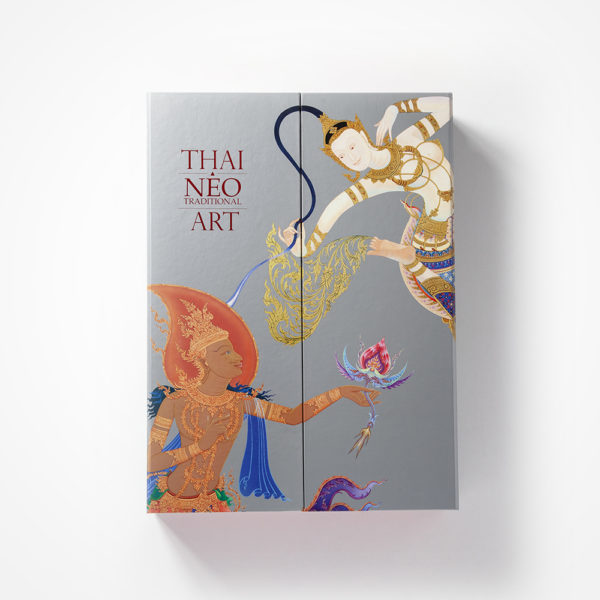 Thai Neotraditional Art is a quintessentially Thai art practise that emerged from the late 1970s to the early eighties, but which has roots reaching back into earlier historical periods of Thai artistic expression and the religious traditions and cultures that predate them. This book, Thai Neotraditional Art, explores this rich historic background and the milieu that lead up to the establishment of the movement before surveying six of its most important practitioners: Chalermchai Kositpipat, Panya Vijinthanasarn, Sompop Budtarad, Rearngsak Boonyavanishkul, Thongchai Srisukprasert and Alongkorn Lauwatthana.

hardcover in clamshell box with printed on canvas with framed canvas size 30.5 x 42 cm. It was printed to the highest standards on the finest acid-free, lignin-free, archival canvas. It was personally supervised and approved by the artist. Each print was hand signed and numbered by the artist. This fine art print was created from an original painting during the lifetime of the Artist. Book size 30×30 cm., 240 pages, each signed by 6 artists, bound book with Geltex spine.

Chalermchai Kositpipat attractedthe attention of many sponsors who chose him for specific and notable commissions. Despite the often controversial natureof some of his early paintings, his stature and ability among his peers rose to the extent that not only did his work becomemore widely accepted, but also led to His Majesty King BhumibolAdulyadej of Thailand being counted among his list of eminentand influential clients.

Chalermchai was born in Chiang Rai, the northernmost part of Thailand, but graduated with a Bachelor of Fine Arts degree in 1977 from Silpakorn University, Bangkok. Among Chalermchai’s captivating work is his mural at Wat Rong Khun (The White Temple), an ornate Buddhist temple in his native province, of which he is quoted as saying: ‘Only death can stop my dream, but can not stop my project.’ His status on the international art scene was further confirmed in 1998 when one of his works sold at a Christie’s auction in Singapore for US$17,000.

If the artist’s name is mentioned, many people think of his works concerning Thai art and tradition which tell the Buddhist stories elaborately. Most of his works reflect the Buddhist stories, philosophy, and Thainess. All are told through the gentle face of the Buddha image, but the content inside is full of intense stories reflecting the good and the bad clearly. His works we are most familiar with are paintings.