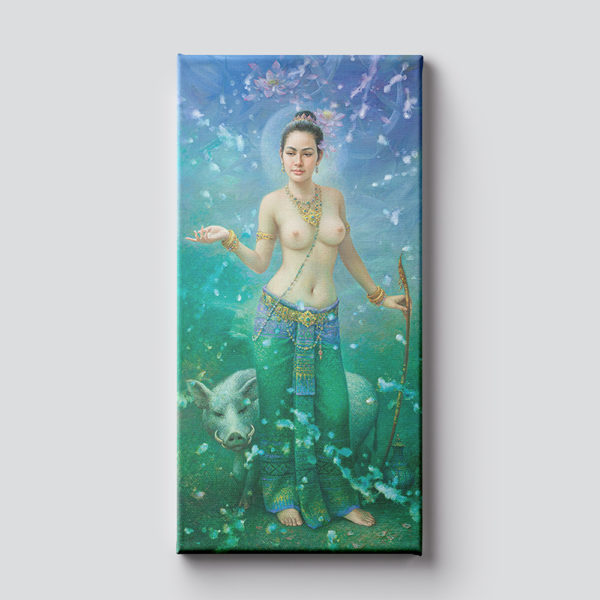 One of Songkran Devi (Angel) is called “Raksot Devi” , who is the daughter of Kabinla Prom. Legend said that Kabinla Prom lost his gamble and promised to cut of his head as a prize. However his head cannot be placed anywhere because if his head were placed in mid-air, there would be no rain. If placed on land, there would get on fire or if dumped in the ocean, we would be water on Earth so he asked his 7 daughter to carry this head around Mount Phra Sumain (Each Devi represents day of the week). Year 2015, the one on duty is called “Raksot Devi”

Raksot Devi is the Songkran Devi for Tuesday who wears golden Armlet and bracelet. In addition she has a hair pin that made from a Royal Lotus. Her weapons are trident and a bow. Her vehicle is a Royal Pig

Sompop Butarad together with MOCA Bangkok have made 29 Limited editions of Raksot Devi Print on Canvas. It was printed to the highest standards on Epson quality archival, finest acid-free, lignin-free, size 45 x 90 cm. Each print was hand signed and numbered by the artist Sompop Budtarad