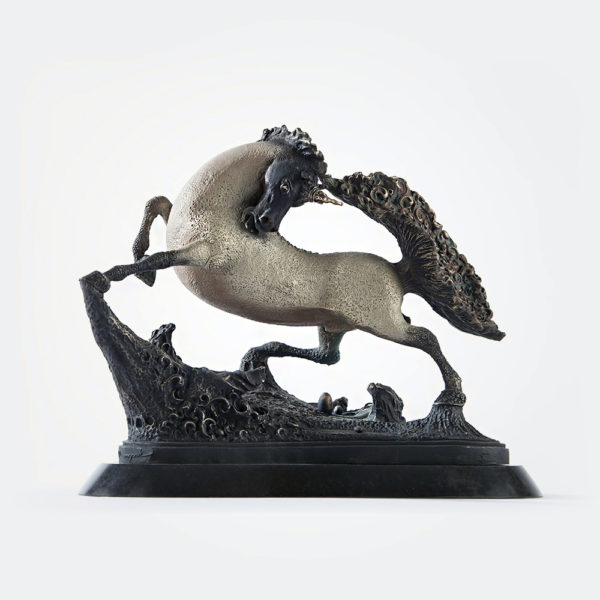 The painter Rearngsak Boonyavanishkul (b. 1961) was born and studied in Thailand, has worked in Bali and other Southeast Asian countries and is now well established in Singapore. This volume presents some 250 examples of the achievements of his artistic journey. There are neo-traditional Buddhist influenced paintings, rich presentations of Thai and Buddhist traditional dancers, perceptive studies of the ancient Thai capital Ayutthaya and works on Buddhist tradition and history.

Graduated during the eighties, Rearngsak Boonyavanishkul was heavily influenced by the modernism movement in the West. He went through a period of Surrealism, painting words that transcends reality and escapes into the metaphysical world. As a Thai artist, his works are often heavily laced with religious themes.

“My sculptures are characterized by surrealist symbols that allude to the cycle of birth, life and death. I don’t claim to have any answers to these great mysteries, and I don’t have any moral agenda. My only hope is that the pieces here will bring pleasure to the people who see them and light a spark in their own imagination”

Boonyavanishkul’s horse are proud, powerful beasts indeed. They fill their space with a certain haughtiness that is attractive to the eye and highlights the dignity of the horse as one of the world’s most beautiful and graceful animals. One recognizes Boonyavanishkul’s horses not as one specific species but as an amalgam of many, both Western and Asian, real and imagined. The deeply patterned surfaces of each animal is a study in symbol and the physical reality of the body. The patterns suggest the very life of each beast and in so doing they demand to be touched.

“My horse is purely from my imagination. Early on ,, in 1989, I began to draw horses when l came to Singapore. My horses have aspects of many different kinds of horse. But my horse of the imagination is there to represent human life. It is, for me, a metaphor also for suffering. Humans are born to suffer, I think,” says Boonyavanishkul. “I began by representing the veins and the flowing of blood. Other patterns are from traditional Thai patterns that represent traditional heavenly, the glory of the king. But my function has changed to express my own idea of beauty and flow of energy. There is no religious significance in my work.”