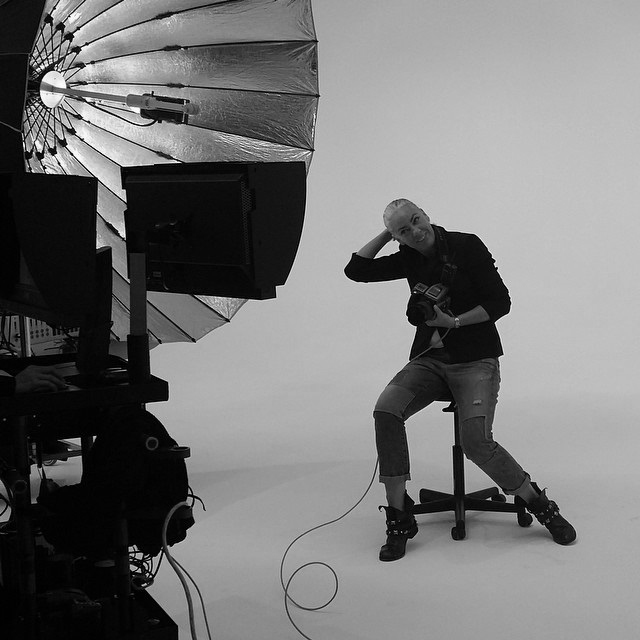 Austrian-born Sylvie Blum started a career in modeling prior taking the helm as a photographer. Sylvie has worked as a well-known art and fashion model for 16 years in front of the camera with esteemed photographers such as Helmut Newton, Jan Saudek, Lucien Clergue, Jeanloup Sieff.

In 1991 Sylvie met legendary artist and photographer Günter Blum and became “his model, his muse, his wife”. By his side, Sylvie refined her understanding of light, composition, dark room techniques and other aspects of photography.

After her husband’s long illness and death in 1997, Sylvie bought a Polaroid SX-70 and initially started photographing herself and published her first book “Venus” in 2000. Christie’s New York sold her Polaroids from the “Venus” Collection in 2014. A picture of her Polaroids was on the cover of the Christie’s auctions catalog.

Fascinated by artistic nudes, as they were so perfectly presented in the 1930’s by photographic legends such as George Hoyningen-Huene or Horst P. Horst, Sylvie Blum started creating body fragments, photographic torsos that attain an almost sculptural impression in the artistic lighting and delicate gradation of gray tones. However, the sources of her inspiration are far more varied. Photographs from her bewitching photo series Nudes revealed the spectrum of her work.

From 2002 – 2019 Sylvie published 5 art books dedicated to the human form. Her pop art “selfies” soon became famous amongst art collectors and museums. Whether on the trail of Ansel Adams, Leni Riefenstahl or Herbert List, her images all have something in common. Sylvie Blum gives them something modern and perfects the fine art photography with the utmost aesthetic quality. Sylvie has found her spot in contemporary photography. British Maxim stated “… Sylvie is the Ansel Adams of the nude female form.”

In 2005 Sylvie relocated to the USA, soon working on different art projects. Sylvie met David Fahey in Los Angeles, who soon became her mentor and artistic inspiration. David Fahey encouraged her to work on a new book project.

In 2011, her book “Naked Beauty” was publish by TeNeues. The Fahey Klein Galleryexhibited her work together with iconic photographer Herb Ritts.

“To work with those beautiful, impressive animals in combination with the female body was very challenging. Every aspect of that shoot was extremely exciting and one of my biggest productions I have ever made for my art work. My Big Cats shoot was planned for several years. It started in 2004 in South Africa and Namibia studying wild life. Working with animals and at the same time with several models are certainly a challenge since everything has to fall together to get the image I planned for. You need a lot of patience and show a lot of respect for these animals. With the production of my “Big Cat” series I made my dream come true, I had since
my childhood.”

Sylvie continues: “This is a once in a lifetime experience. I created images that were sold at Christie’s New York and images that are in the permanent collection of the Museum of Contemporary Art- MOCA BANGKOK. This makes me very proud”.

Sylvie is represented by the finest galleries around the world. With her artworks Sylvie is a contributor to the Aids Monument in Los Angeles as well as a supporter of the “Bridge Home” initiative by the Major of Los Angeles.